As a local business we wanted to share some background knowledge on us and for you to meet us, the Tectonic Team and who’s involved with what. We went from being a one man band to a strong team of 6. We have a mixture of approved electrical engineers, apprentices and an administrator. We pride ourselves on being a small local company that provide a reliable and quality service.

We're not around right now. But you can send us an email and we'll get back to you, asap. 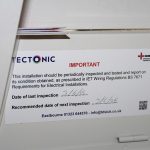